WHY DOES MAGNA HAVE TO BE A BAD THING?

Since the March 23 announcement that the Maryland tracks will not go to auction, but will instead be picked up by Frank Stronach’s real estate company, MI Developments, I have read one sour comment after another.


I understand the disappointment of Maryland horsemen and their fear that Magna is responsible for the downfall of Maryland racing.  I, too, have lost money.  I’m in debt to my feed company, the bank, and a good friend, and though I have two beautiful Outflanker Maryland-breds, I will have a lot of trouble selling them, and if any money comes in, it will only pay off debts.


But remember, it was the Maryland legislators who bought the nails and the hammers to pound the lid down on Maryland racing.  Magna DID COME UP WITH THE MONEY -- in an escrow account.  Isn’t it obvious Magna’s escrow money was rebuffed by the Slots Commission because the politicians were already in bed with Cordish?


But the citizens got irate and passed a referendum to allow the voters of Anne Arundel County to vote on whether or not to have slots at Arundel Mills. So next fall, Magna may be able to file for re-zoning and have the slots go to Laurel where they belong.


Has anyone been to Magna's Gulfstream Park recently?  It is beautiful.  It is clean, aesthetically pleasing, has upscale restaurants and shops.  What sense would it have made for them to rebuild a grandstand and paid tax dollars on a huge space that remained empty for all but a few days of the year?


Years ago you could not watch racing all day long on TV.  Except for a few races a year, if you wanted to see a race, you had to show up.  Now people watch and bet from their couch.  So stop moaning about how it used to be.


Start thinking about how it could be.  Laurel Maryland is a fabulous location halfway between D.C. and Baltimore.  It has a train track that goes to the grandstand.  It has two major highways close by.  But it has no upscale shopping or restaurants.  It is NOT a trendy area.  If Magna does a job on Laurel like they did on Gulfstream, Laurel will be a must go destination. 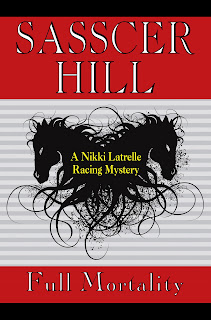 "If you like the work of Dick Francis or Sue Grafton, you will like Sasscer Hill. With a true insider’s knowledge of horse racing, Hill brings us Nikki Latrelle, a young jockey placed in harm’s way who finds the courage to fight the odds and the heart to race for her dreams.” – Mike Battaglia, NBC racing analyst and TV host, veteran track announcer, and “morning line” odds maker for the Kentucky Derby.


So excited, I forgot that my short story "Venemous," the second in the Janet Simpson series is now available through the latest edition of the anthology, "Chesapeake Crimes."  This anthology it titled, "They Had It Comin'." Take a look at
http://www.amazon.com/gp/search/ref=a9_sc_1?rh=i:stripbooks,k:chesapeake+crimes+they
Posted by Sasscer Hill at 6:12 PM 3 comments