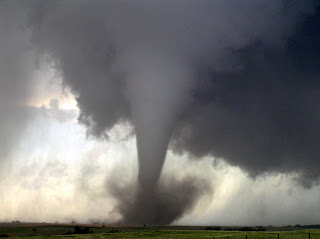 On April 20, I flew into Lexington’s Blue Grass Airport to attend the races at Keeneland and a book signing for my novel, FULL MORTALITY, at Joseph-Beth’s book store. Got to meet up with old and new friends, too.

Keeneland and the horse racing I watched on Thursday and Friday were fabulous. Silks, bourbon, ladies in amazing hats an perilous high heels. I even bought myself a "fascinator" in purple and black.


Since everything in life is a trade off, I shouldn’t be surprised my Friday evening book signing at Joseph-Beth’s was routed by a tornado. When the warning siren went off shortly after seven p.m., I stared at the sky beyond the store’s glass ceiling and walls and felt more than a little uneasy.


The staff herded me and what might have been FULL MORTALITY customers down the escalators to the store’s first level, away from the glass. We were all scared, and I felt especially bad for the mothers in the store with little children.


We got lucky. The twister skipped over us, sucked itself back into the sky, and taught me something before it departed: tornados are not good for book signings! Most people left immediately after the all clear, anxious to check on their families and homes.


Still, there’s a rainbow at the end of this post on Lexington book signing and tornado watching. Hall-of-Famer and Kentucky Derby winning-jockey Kent Desormeaux showed up around nine and bought a copy of FULL MORTALITY.


After reading the back cover text, he said, “So if I read this, I’ll be going back to my glory days in Maryland?”


“Yes,” I said, giving myself a mental head slap.


I’d never made a conscious connection between my novel about fictional Maryland jockey Nikki Latrelle and Kent Desormeaux, who after his 1986 rocket-ride through Maryland won an Eclipse award for Outstanding Apprentice Jockey. Desormeaux nabbed his first career stakes race on December 13, 1986, riding Godbey in the Maryland City Handicap at Laurel Park Racecourse, and I remember screaming at the TV set for this former Maryland Jockey to win the 1998 Kentucky Derby. He did. And he won it again in 2000 and 2008!


I got a bit more racing in early on Keeneland’s Saturday program. What a whirlwind of a trip.  I know, I know – that was lame.


I want to thank Brooke Raby of Joseph Beth’s for making the absolute best of a bad situation, to Lexington’s Paula Weglarz for ferrying me about town and making sure I was dosed with Kentucky bourbon, and to the amazing Sheppard racing stables for allowing me in the Keeneland paddock for up close research for my favorite jockey, Nikki Latrelle.

RACING FOR A WRITER'S INSPIRATION

Horse racing is my inspiration – the risk, the beauty, the speed, the endless opportunities for skulduggery, and the extraordinary “Upstairs Downstairs” quality of the characters who inhabit the life.

Picture the winner’s circle, a poverty-level groom holds a hundred-thousand-dollar horse for a trainer who may be living large, or only hand-to-mouth. With them stands the rich or possibly almost-broke-owner who may also be a white-collar-crook. Or he might enjoy a golden life of lofty social status. I’ve seen them all.

Following the Triple Crown trail three years ago, I was fascinated by the  stories surrounding Derby favorite, “Recapture the Glory.” The horse was owned by wealthy New Orleans Ford dealer, Ronnie Lemarque, a showman who liked to sing and dance.

Back In 1988, Lemarque and his trainer, Louis Roussel, came close to winning the Triple Crown with a horse named Risen Star who won two legs of the famous series. When the horse annihilated his Preakness competition, Lemarque snatched the microphone from the TV host and belted out, “Way Down Yonder in New Orleans.” There was no stopping him.

Twenty years later Roussel and Lemarque got their hands on another talented colt, naming him “Recapture the Glory.”

In the middle of the fanfare surrounding this 2008 comeback, Lemarque’s wife hired a hit man to murder her husband, and did it while under the microscope of the sports paparazzi. Maybe she was tired of him singing. Maybe LeMarque was two-timing her. Whatever the reason, the press crawled over this story like bees on a beignet.

In the end, the horse failed to win the crown, the murder plot was discovered in time, and the wife was convicted and imprisoned. It’s hard to make up a plot better than this!

But since I have to try, here is how I might use a memory from the track and morph it into a murder mystery.

One day at Laurel Park racetrack, the stubborn child in me was determined to catch a brown hen that pecked for grain outside my horse’s stall. A number of trainers raise hens in their barns at Laurel, and I’ve been fond of chickens since I kept them as a child on the family farm.

After chasing the hen into an empty stall, I asked a buddy to close the top and bottom doors so I could catch the hen before she escaped. I caught the bird, stroked her smooth feathers, and thoroughly enjoyed myself, just like a six-year-old.

Of course, I couldn’t stand around holding a chicken all day, so I pushed against the doors and discovered my buddy had fastened the latches on the outside. I called out and waited for him to come back. He didn’t. After a while, still holding the chicken under one arm, I stuck my hand through a hole between the doors where some anxious racer had gnawed the wood. I waved and yelled for someone to come and let me out.

A woman I’d never seen before did. She opened the door and said, “What are you doing in there with that chicken?”

But suppose I’d been in there with a dead body? Or suppose a man with a long serrated knife had opened the door. What then? What would my protagonist Nikki do? No doubt Nikki would launch the hen, flapping and squawking into the face of the man with the knife, then run for her life. But who was this man, she’d ask. Why did he carry that wicked knife? Hadn’t the wife of a trainer been knifed to death some months back? And a mystery story begins.

I've never wanted to write the great American novel. I believe my job is to entertain with stories about chasing a dream, fighting the odds, and helping the helpless. I want to create a world that’s a bit scary, sometimes funny, always informative, and a reliable destination for escape. 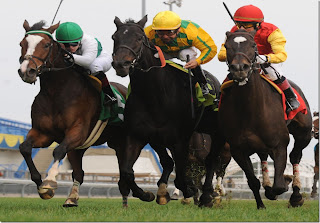