Hooray for Sara J. Henry, who just won the Agatha Best First Novel for her book, “Learning to Swim.”
And kudos to my friend  Leslie Budewitz for winning the Agatha for Best Non-fiction with “Books, Crooks and Counselors: How to Write Accurately About Criminal Law and Courtroom.”

Some of the highlights: 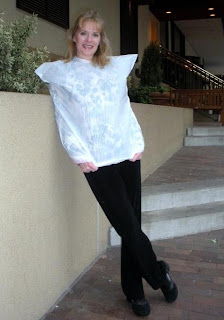 A trash-bag-straight-jacket saved my silk suit. The delightful author of "Chihuahua of the Baskervilles," Esri Allbritten and I decided to skip out on the expensive Malice Banquet and go to an inexpensive Indian restaurant across the street. Unfortunately, rain poured onto the street while we were eating Tandoori lamb. 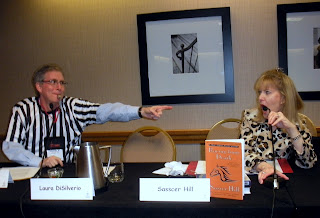 This is why they call the conference "Malice Domestic." Pictured above is my friend and panel referee "Alan 'the Whistle' Orloff," totally failing to keep me under control. This pic is from the "Three Strikes and Your Out" panel of sports mystery authors. 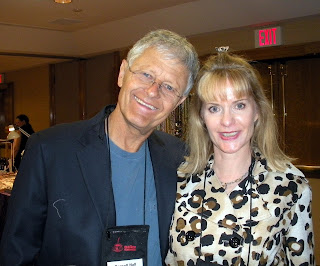 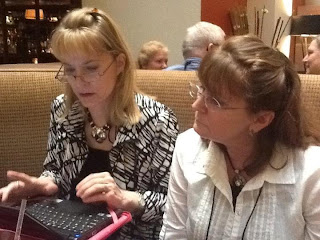 Me and Becky Hutchinson. I lost those glasses, if anyone found them, let me know! 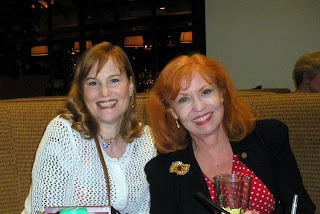 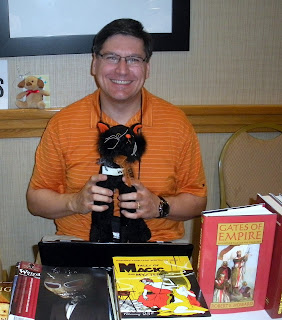 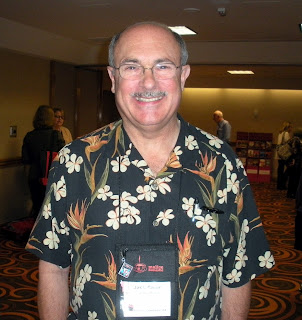 Jack Cater, marvelous moderator of "Malice Go Round" led us through a maze of madness! 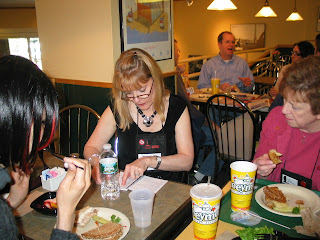 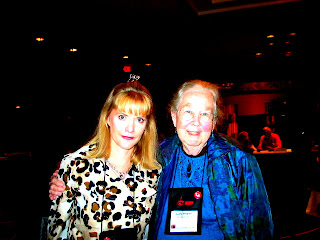 Me and Judy Hogan, whose new book comes out soon!!
Posted by Sasscer Hill at 12:41 PM 15 comments

Racing from Death Reviewed by Sandra McKee of the Baltimore Sun

"New novel about a Laurel Park jockey is a wild ride." 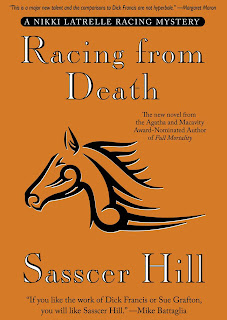 When Sasscer Hill was growing up, she rode stick horses and plow horses and read "The Black Stallion" novels, a series of books about the friendship between a young boy and a beautiful black Arabian stallion. In the process, she fell in love — with horses and books and, eventually, writing.
On April 15, her novel "Racing from Death" is being released by Wildside Press. It is the second in a series about jockey/ assistant trainer Nikki Latrelle, a Laurel Park-based rider, who finds herself caught up in murder.
While Hill has been compared to Dick Francis and Sue Grafton, "Racing from Death" reflects the respect she has for horse racing and the influence of the late Walter Farley, the author of "The Black Stallion" series.
Hill's characters, some of whom are compilations of people she has known at tracks, come through as authentic, and her sentences are short and crisp. While full of description, she hands out Latrelle's background sparingly, building curiosity.
The book is a page-turner. In just 193 pages her jockey-detective must deal with someone killing jockeys with "diet cocktails," a burned body, an unwanted passionate attraction, a hidden methlab, an old family secret, and the disappearance of her friend and exercise rider Lorna. Oh, and then there's her job, which is to train and race a string of thoroughbreds for her boss, Laurel-based trainer Jim Ravinsky, at Colonial Downs in Virginia.
Hill said the book is about chasing a dream, helping the helpless and fighting the odds.
"It's those ideas that carry me along when I'm writing the stories," said Hill, whose full name is Lynda Sasscer Hill. "I read every Walter Farley 'Black Stallion' book when I was a little kid in grade school. I loved them for the way they made me feel. I want to write books like that, that entertain people. I want to write a good book that people want to retreat to — a 'Black Stallion' for adults."
Hill is an amateur steeplechase rider — and winner. She's ridden in fox hunts for 22 years and is also a horse breeder, who still lives on her family's farm, Pleasant Hills, in Upper Marlboro with her husband.
"You get to understand how horses behave and what people will do during a race to win," said Hill, 61. "You can feel a horse's fear and its bold heart. The way you feel the excitement during a [steeplechase] is very much the same as that on a flat track."
Thanks to her experience, the action in her book comes off as authentic — like this passage in which Latrelle rides her mount Stinger to a third-place finish:
"The gray moved alongside me, crowding me into the rail. I sat chilly, asking for restraint, and Stinger listened, allowing the favorite to go by. I waited. Then waited some more.
"We were through the turn at the top of the stretch, lying about sixth when I asked him. Stinger turned on the speed, rushing to the heels of the gray just ahead. I planned to use the favorite and hoped he'd live up to his short odds. He did, shoving his head into a nonexistent hole next to the rail, hammering through it. Mental "Yes!" as Stinger drafted in his wake ... We lay second ... at the wire, the second-favorite shoved his head forward, leaving us third by a whisker. ... But hey, we were supposed to be last."
Hill will be signing autographs in support of Susan G. Komen for the Cure in the grandstand area at Pimlico Race Course from noon to 2 p.m. on Black-Eyed Susan Day, Friday, May 18.
sandra.mckee@baltsun.com
'Racing from Death'
by Sasscer Hill
Wildside Press, 193 pages, $14
Copyright © 2012, The Baltimore Sun
Posted by Sasscer Hill at 1:14 PM 0 comments

HORSE OF THE DELAWARE VALLEY Reviews "Racing from Death."

Following review appears in April 12 issue of “Horse of the Delaware Valley.” http://www.horsedelval.com/

Author Sasscer Hill has hit her stride with her second, and hopefully one of many more, race track mysteries, ‘Racing from Death’.

Jockey and assistant trainer, Nikki Latrelle, who readers first met in Hill’s Full Mortality, is charged with the responsibility to take a load of Virginia-breds from Laurel Park in Maryland to Colonial Downs near Richmond for six weeks, where owners would get 50-percent on top of purse money for Virginia- breds.

Before loading up the van, Latrelle had already stumbled on the beginning of what would become an adrenaline rushing stay when a fellow jock died suddenly from designer weight-loss drugs.

At the funeral of Paco Martinez, the victim of the lethal concoction, Latrelle is approached by a stranger, Jay Cormack, an agent with the Operations and Enforcement arm of the Virginia Racing Commission, who asked her to be his eyes and ears on the backstretch in his investigation into illegal drugs.

At first she refused, but as events unfolded she was drawn in despite her misgivings.

Latrelle attracts danger like a magnet, and from the minute she and her friend and exercise rider, Lorna Doone, who had overcome her own drug demons, arrived at their assigned stabling, far on the backside near dense woods, the story takes the first of many plot twists when a strange man emerges, moaning, from the pines dragging a shovel saying, “Everybody knows, but they won’t tell.”

Driven off by Latrelle, Doone and the groom, Ramon, the man shuffles away, and, when the horses are settled in, the women leave to go to the rental cottage where they will be staying, only to be confronted by still more mystery and danger.

Racing from Death has all the elements of a compelling read, sex, betrayal, racing, danger and ultimately murder. Colorful characters abound, including an exotic and temperamental owner who was once a super-model and who is involved romantically with one of the prime suspects.

The mystic, Mello, who appeared in Full Mortality, arrives to soothe Latrelle's own horse, a filly so talented but equally unmanageable that she is nicknamed ‘Hellish’. Latrelle encounters some of the most unsavory gang members in the heart of their headquarters, a meth lab, to ever disgrace the pages of a novel where she barely escapes with her life.