THE BEST RACE MARE IN HISTORY; Notes from Donny Christmas

As I was admiring the accomplishments of Zenyatta, I was reminded about Gallorette ( trained by my uncle, Edward A. Christmas),and decided to Google "Gallorette", and below are notes from some of the resulting web pages. One has a recent newspaper article comparing their accomplishments. I had forgotten that Gallorette raced 72 times, 55 of which were against males, where she finished in the top three.

Until her retirement at the end of 1948, Gallorette ran most of her races in unrestricted company. Of her seventy-two career races, fifty-five were against males — she had twenty-one wins and finished in the top three fifty-four times. She consistently ran against the best males of her era: Armed, Stymie, Assault, Pavot, and Polynesian, to name a few. Her most significant wins came in the Met Mile and the Brooklyn, Carter, and Whitney Handicaps. She retired as the all-time  female money winner with earnings of $445,535.
In 1955, Gallorette was voted the best filly or mare of all-time in a poll of members from the American Trainers Association. She was inducted into the Racing Hall of Fame in 1962.

While we are lucky to have Rachel Alexandra and Zenyatta to watch in 2010, caution needs to be given before we call either of them the greatest filly or mare of all-time — neither will match Gallorette’s record or the level of competition she faced on a regular basis. In fact, with the overly-cautious campaigns that dominate modern throughbred training, we’ll likely never see another one like Gallorette. If anyone wants to call her to the greatest race mare ever, you won’t get an arguement from me. 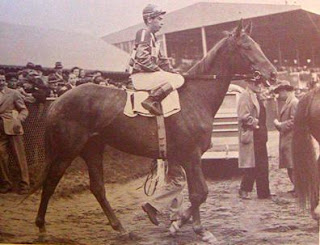 A note from Sasscer Hill:  Now you know why Gallorette figures so prominently in my Nikki Latrelle mystery,
FULL MORTALITY!
Posted by Sasscer Hill at 6:54 AM