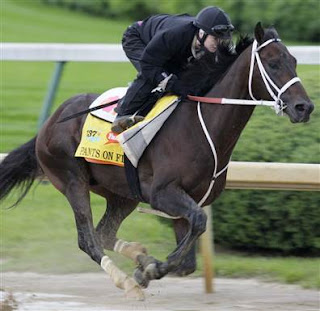 There are several colts I like in the Derby. A horse named Dialed In, whose trainer is Nick Zito; a horse named Nehro, with Steve Asmussen as the trainer, and finally my emotional pick, Pants on Fire.

How can you not like a racehorse with a name like Pants on Fire? My heart is bound to this colt and his female jockey because of the rider’s connection to my horse racing mystery, “Full Mortality.” My book features the young, female, Maryland-jockey,  Nikki Latrelle.  Two of the themes in the Latrelle series are “fighting the odds,” and “chasing the dream.” In the Derby, Pants on Fire will be ridden by a young Maryland gal who, like Nikki, is competing with the male jocks.  Her name is Anna Napravnik. Fans call her Rosie because of her red hair.

Many believe Pants on Fire has a lot of speed, but not the stamina to go the Derby distance of one and one-quarter miles. His pedigree and improving performances suggest otherwise.

“Fire’s” trainer is a man named Kelly Breen who knew his colt had brilliant speed. But Breen entered Fire into the one-million-dollar Loiuisiana Derby a few weeks back as a “rabbit” – that is, a horse to set a rocket pace that forces the other horses to go faster than they like, and allow a come-from-behinder with a late kick to blow by the field in the last strides. Fire was supposed to do this for Breen’s other entry, Nacho Business.

“I told Rosie,” Breen said, “that I thought this horse was coming into his own. So I said to her, ‘Give it a shot. Don’t just think we’re in here because we have nothing better to do. He’s doing awfully well. You don’t have to wing it and be a rabbit. Just be in a spot where you can win it when the time comes.’ ”

Now, Pants on Fire is giving Anna Napravnik the chance to chase her biggest dream – winning the Kentucky Derby.  Can you imagine the remarks by pundits and the press if the redheaded, Anna “Rosie” Napravnik beats the boys and wins the Kentucky Derby riding a horse named Pants On Fire?

Expenses and scheduling precluded the Derby for me this year, but I'll be watching this fabulous race from the couch, bourbon in hand, and little purple "fascinator" Derby hat on head! 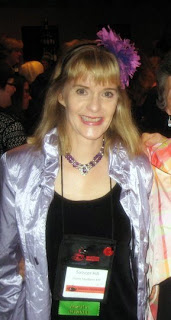 Nothing like watching the Derby, whether in front of the TV or at Churchill Downs. Although my only experience was during my college years when we settled in the infield. I heard the race but couldn't actually see the horses. Some day I'll make it back, large straw hat in hand.

Congratulations on being a finalist in the Agathas. FULL MORTALITY is loaded on my Kindle and I can't wait to read it.

Thank you, Cindy. Love your title, DYING FOR A DATE!
Sasscer