LETTER-to-the-EDITOR in Support of Slots for Maryland Racing 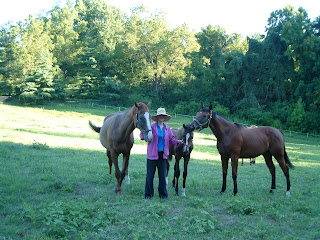 "Maryland Let’s and Industry Fade," a pro-slots, pro-maryland racing and horse-breeding letter-to-the-editor, appeared on the editorial page of the "Washington Post on August 13, 2008 along with the posted photograph. That's me in between the broodmare In Her Honor, the weanling filly Bet the Dream, and with the yearling filly In Raven’s Honor determined to be part of the picture.
A similar letter, "A Plea to Reconsider Slots," appeared in the august 28 issue of the "Enquirer Gazette" and on Gazette.net, publications of Post-newsweek Media. This second letter is is posted below.

"A Plea to Reconsider Slots,"

I am a thoroughbred horse breeder on a small farm in Upper Marlboro. As such, I would very much like to give my take on the slots issue.
Right now, it is difficult to sell a registered Maryland-bred horse at auction. West Virginia and Pennsylvania provide lucrative bonus opportunities in their state bred programs and huge purses to owners of state bred horses. Maryland-breds have little to offer by comparison.
Exactly why is it difficult to sell? Here's an example: At the Fasig Tipton yearling sale of 2006, held at Timonium, I had a yearling for sale. Normally, an agent will take your sale horse, stable it, keep it groomed and fed for a few days before the sale, "showing" it to customers. A number of buyers came to my agent's barn and would actually say, "Don't bring out any Maryland-breds, we only want to see Pennsylvania-breds."
When my horse went into the ring, there was no bid. I had to pay the agent and the auction company, Fasig Tipton, $1,000 in minimum commissions for a horse that did not sell. This was a nice horse. I was lucky to sell him privately, and he has been competitive and won money. On paper, because of his confirmation and pedigree, he was worth about $30,000, which I likely would have gotten had he been a Pennsylvania-bred. This money would have gone right back into the business – to my blacksmith, my hay dealer, my veterinarian, backstretch workers when my horse runs in Maryland and the horse owner, just to name a few.
I told this tale to a [newspaper] editor and he asked, "How does Pennsylvania having casinos at some of their racetracks affect breeding and sales? After all, the Fasig Tipton auction you mention took place in 2006 and Pennsylvania didn't have casinos until 2007."
I replied, "But slots had already passed in Pennsylvania. Everyone knew what the future held for Pennsylvania-breds."
The more I support slots, the more I realize people truly do not understand the horse industry. They only see slots as an evil thing. State religious leaders and anti-slots organizations insist slots will take food out of the mouths of children and promote crime. But the largest percent of slots money will go to education. Think school lunch programs. Statistics are available showing Charles Town, W.Va., has a lower crime rate now than before slot machines.
People ask me how I can support legalized gambling that will hurt the poor. I ask them what is the state lottery? The low income people I see lined up at liquor stores after cashing their paychecks can ill afford to gamble on the state lottery. Unlike the corner 7-Eleven or liquor store lottery outlet, Maryland slot gamblers regularly buy gas and pay tolls to drive to the slot locations. They must meet a dress code and pay more per ounce for a drink. And the Maryland slot gamblers already exist. They just take their money out of state. If you go to Charles Town races or Delaware Park, just look at the license plates in the parking lot. They are mostly from Maryland. I know; I have seen them many times.
One last interesting fact. There will be 15,000 evil slot machines if the slot referendum passes. But only five locations. I called the Maryland State Lottery offices and was told there are 4,717 outlets or agents with a license to sell lottery tickets. You've seen them at every corner liquor store, convenience store or gasoline station. You only have to do the math.
Even if you think gambling is evil, can you stop it? So why have hundreds of millions of dollars going out of our state every year to West Virginia, Delaware and Pennsylvania as Marylanders travel to gamble at the casino slot machines?
This is money that can fund education and keep our taxes down. Think about it. Please.
Posted by Sasscer Hill at 6:41 PM