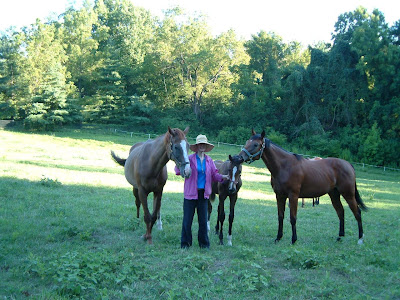 Above: In Her Honor, Sasscer Hill, Bet the Dream, and In Ravens Honor as a yearling in August of 2008.
In Her Honor’s two-year-old filly, In Raven’s Honor, finished second first time out at Philadelphia Park on July 27, 2009. Quick as a wink she was on the lead from the outside post in a sprint going only 4 and ½ furlongs! She led until mid-stretch and was passed in the last strides. The eventual third-place finisher tried to get past her, but In Ravens Honor dug in and prevailed by 3/4! Leading most of the way, she went in 22 and 2, 46 and 3. Final time was 53 flat.
Her trainer, Ramon Preciado was so excited, he called me up after the race! Even though I "gave her away" at the sale last year for $2,500, I am very happy for Ramon as he is also the owner, and took a big chance on her as she has one crooked front leg and may very well have soundness issues. But the way she flew out of that gate was just like watching For Love and Honor. And he won $418,000!
Who knows, maybe my correct Outflanker colt out of In Her Honor will bring a little money for the farm!
Posted by Sasscer Hill at 12:41 PM

I purchased In Ravens Honor in March of 2011, and she is turning out to be quite a nice performance horse! She goes well on the flat, and has been started over low fences. She is going to have a nice 2nd career! And what a personality she has!