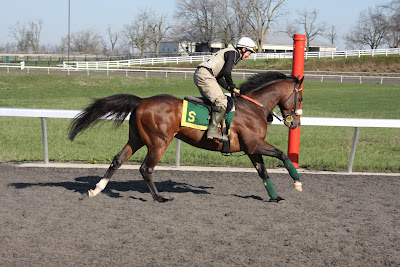 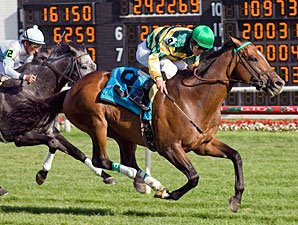 After hitting the board in grade 1 turf races at both Gulfstream Park and Keeneland this year, "Justy" won his first graded stake on Saturday, July 11 at Arlington Park.
Usual rider Julien Leparoux was in the race, riding the second favorite, Thabazimbi. They finished seventh.
New rider E.T. Baird gave Justy a brilliant ride, allowing him to lollygag in the back of the field early in this mile-and-one-quarter race. In the backstretch, Baird asked Justy to run, and the horse responded with a rocket turn-of-foot, passing horses like they were nailed in place and gaining the lead in time to power under the wire ahead of them all.
This past week Barry Wiseman rode Justy onto the track at Presque Isle Downs in Erie, PA and gave him his last speed work before the Handicap. Barry has had Justy in his care for most of the past year at Gulfstream Park, the most recent two Keeneland meets, and now at Presque Isle Downs.
I’ve watched Barry work a lot of horses and he rarely uses the whip, preferring to let the horse work "in hand," instead of "whipping and driving." He’s pretty sure the latter leads to injuries and a sour horse. He is also keenly aware of how many horses run their race in that last work, leaving little for the main event.
Though Barry never asked him, Justy worked so fast it would have been alarming if the horse wasn’t so talented. In the end, Barry’s ride appears to have been just what the horse needed.
Posted by Sasscer Hill at 11:38 AM