THE JAPAN CUP and Just As Well 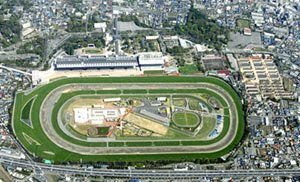 PICTURED ABOVE IS FUCHU RACE COURSE WHERE JUST AS WELL WILL MAKE HIS BID FOR THE $5.28 MILLION JAPAN CUP PURSE!

This year's Japan Cup on Nov. 29 at the state-of-the-art Tokyo Racecourse will see five entries from abroad, three from the United States, two from Britain: Conduit, Scintillo, Interpatation, Just as Well and Marsh Side. Four-time Grade 1 champion Conduit is eligible for the Japan Autumn International bonus, having the opportunity to collect an additional 130 million yen to the 250 million yen the 4-year-old will be awarded should he win the 2,400-meter race.

The first ever Japan Cup was open to North American and Asian horses before and were added to the list the following year. In 1992, the Japan Cup became the JRA’s first Grade 1 race approved by the International Cataloguing. From 1999 to 2005, it was part of the World Racing Championship, then the game’s preeminent international series.

The Japan Cup has been held at every year apart from 2002, when it was held at Nakayama at a distance of 2,200 meters while was under renovation. The race record is held by Alkaased (2 minutes, 22.1 seconds), with Dettori having won a record three Cups. Sir Michael Stoute is the only trainer to have lifted two Japan Cups in 1996 and 1997; Stoute trains Conduit.

The 2,400 meters at starts on the home stretch, with a run of 400 meters to the first turn bending left for 550 meters, into the back straight. After another 400-meter run, the course curves again for two furlongs before leading back home, a straight of 525 meters which slopes upward for the first 225 meters.

Emails from Barry G. Wiseman indicate that the 10 hour time change is tough, the horse is doing well, and this is one of the most "interesting" experiences Barry has ever had.