JUST AS WELL TO RUN IN JAPAN CUP TURF 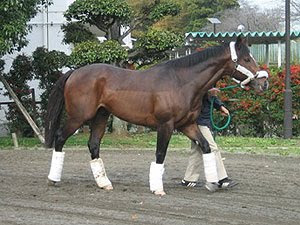 Barry Wiseman, leads the six-year-old contender, Just As Well, on November 17 before the stallion's November 28th run in the Japan Cup Turf race.

The Japanese Racing Association reports: Two American horses scheduled to run in the Grade 1 Japan Cup - Interpatation and Just as Well - arrived safely to Japan on Monday, Nov. 16, and both horses were transported to the JRA Horseracing School Quarantine Center to prepare for the 29th running of Japan's largest prize money race.

Both horses arrived at the Horseracing School at 1:53 p.m., completing a 17-hour trip from the United States. They handled the trip well, despite this being their first time crossing the Pacific.

"The horse is relaxed after the trip, in great shape," said Just as Well's assistant trainer Barry Wiseman. "Like Interpatation, we won't go to the tracks tomorrow and will walk him around the stable area. We will gradually speed up his training."

Just as Well, the 6-year-old horse by A.P. Indy, has won twice and finished runnerup three times in his 2009 campaign. Before finishing fifth in the Canadian International Stakes (Grade 1) in October at Woodbine, the Jonathan Sheppard-trained-and-owned horse took the crown in the Northern Dancer Turf Stakes (G1) and came in second in the Grade 1 Arlington Million and Gulfstream Park Turf Handicap. Just as Well is 5-for-20 with five runnerups and three third-place finishes, earning $1,034,912 in the process.

With a total purse of 533.5 million yen, the Japan Cup will be held over 2,400 meters at Tokyo Racecourse on Nov. 29. The race will be the third leg of the "Japan Autumn International," a four-race series with a total value of 1,217,100,000 yen in prize money - not including the bonuses allocated to the qualified horse